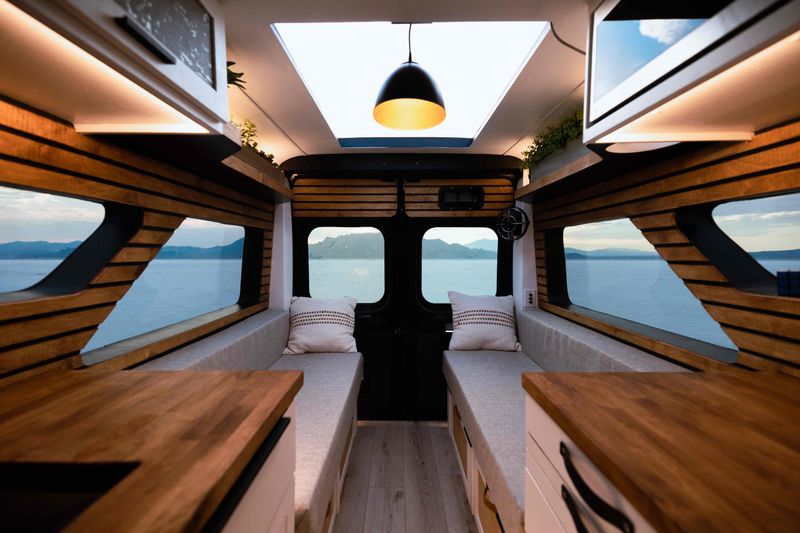 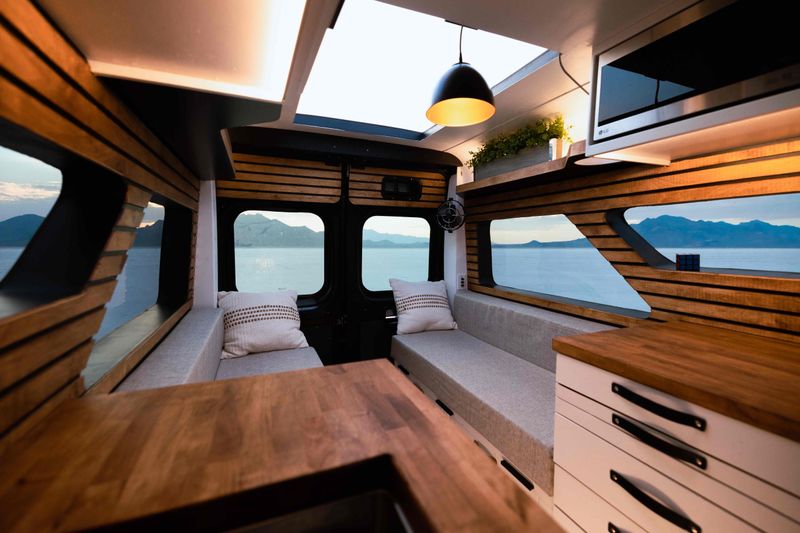 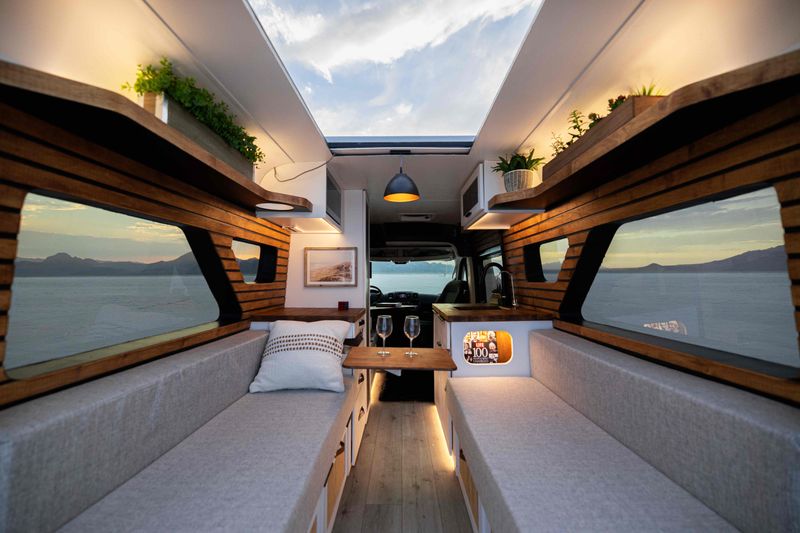 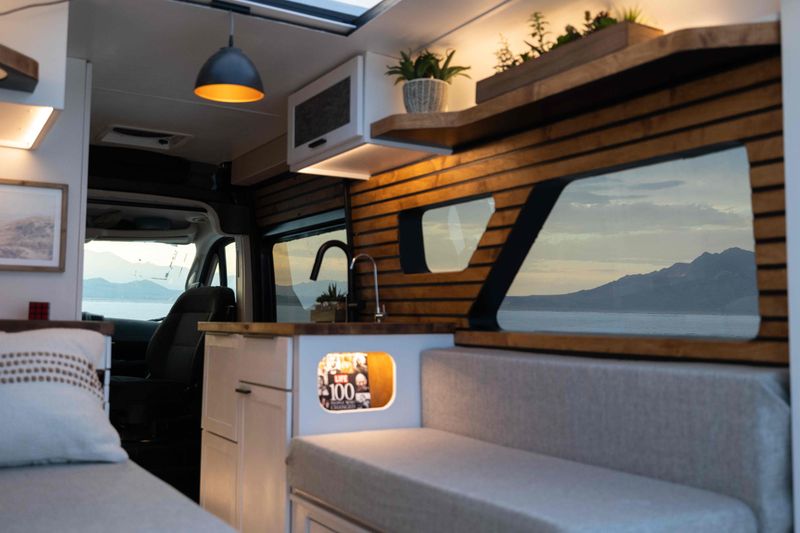 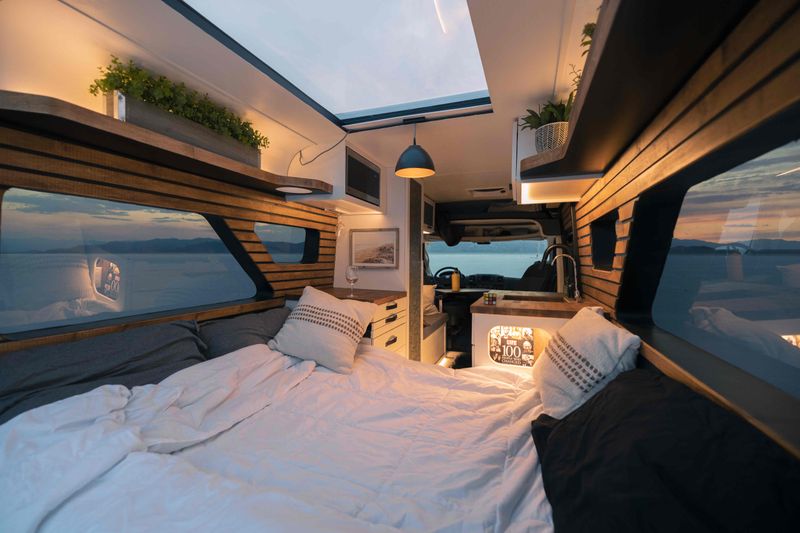 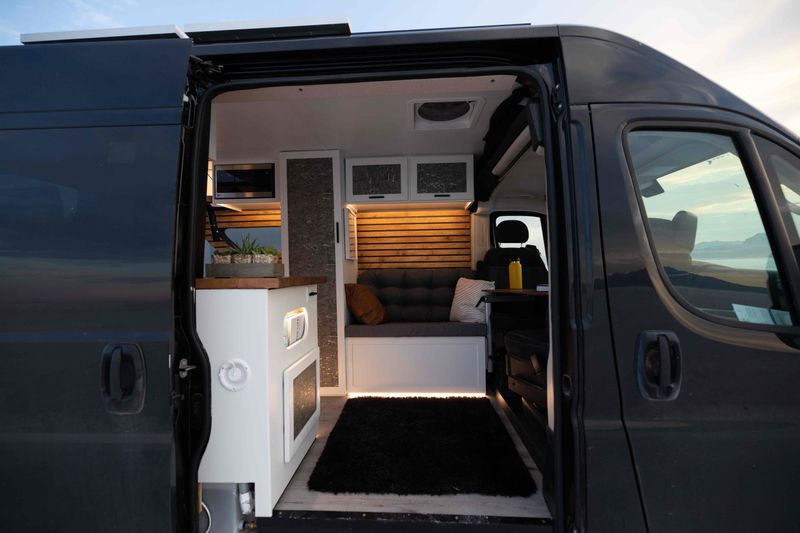 This van has everything! * Secret Shower – most vans that have showers take up a huge amount of space in the van. Not this one. This shower takes up no space and is much larger than almost all other conversion van showers. *Hot water heater. – you can take hot showers in this van. *Huge skylight- this skylight is 3’x4’….. it has a convenient blackout shade that slides over and doesn’t let any light leak through. * Toilet- cosette Toilet slides out from under sink on 250LB drawr slides. * closet- holds 40 tee shirts. * Filtered drinking water. This van has a 4 stage reverse osmosis drinking water filter. Very clean water for drinking. *Fridge/freezer by dometic is a 75L size – one of the largest fridges you will find in a van conversion. Its also super energy effecient- doesnt use much power. *25 gallons of freshwater – This is more freshwater than most van conversions hold. *Large solar battery – This van has a 200aH Lithium battery by Renogy. Its overkill for most peoples electrical use. *400 watts of solar panels on roof – The 200 aH lithium battery is charged through the solar but also through the vehicles alternator while driving. your battery will pretty much never be dead. * Swivel seat – The swivel seast makes the van feel more open. The living space extends into the cab. *Full size bed * all lights are dimmable to whatever brightness you want. * Stove Top – this van comes with an induction cook top which is very effecient and doesnt consume much power while being used. Heats food qucik also. * 2000 watt inverter – you can power almost anything. The biggest microwaves use only 1500 watts of power. * sound system- This van has a “Bose Solo 5 sound bar”. * 2 Grey water tanks under van. 13 gallon and 7 Gallon.