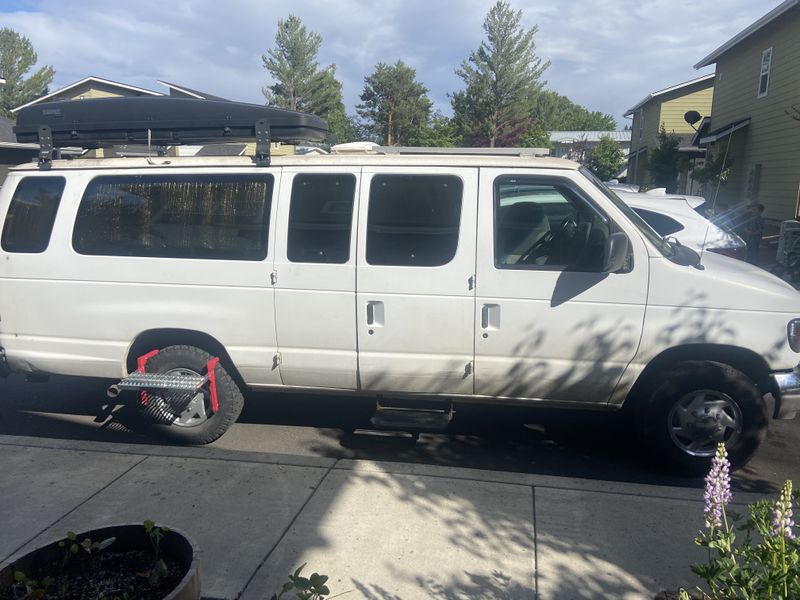 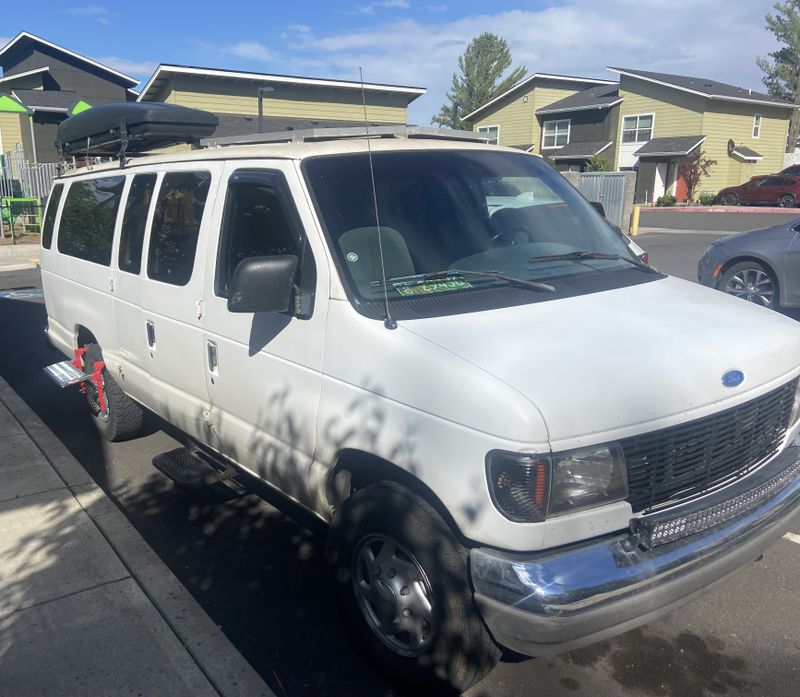 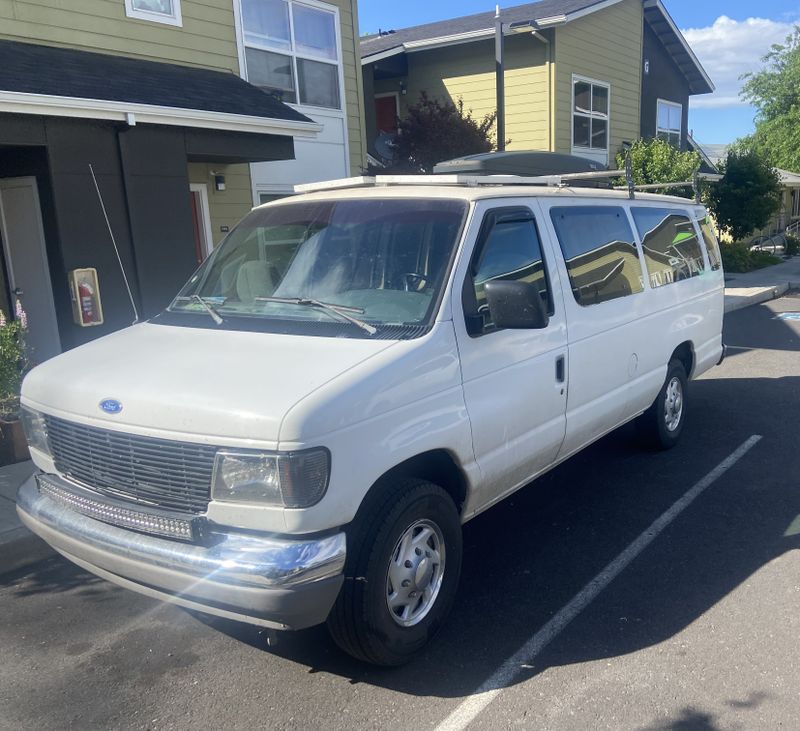 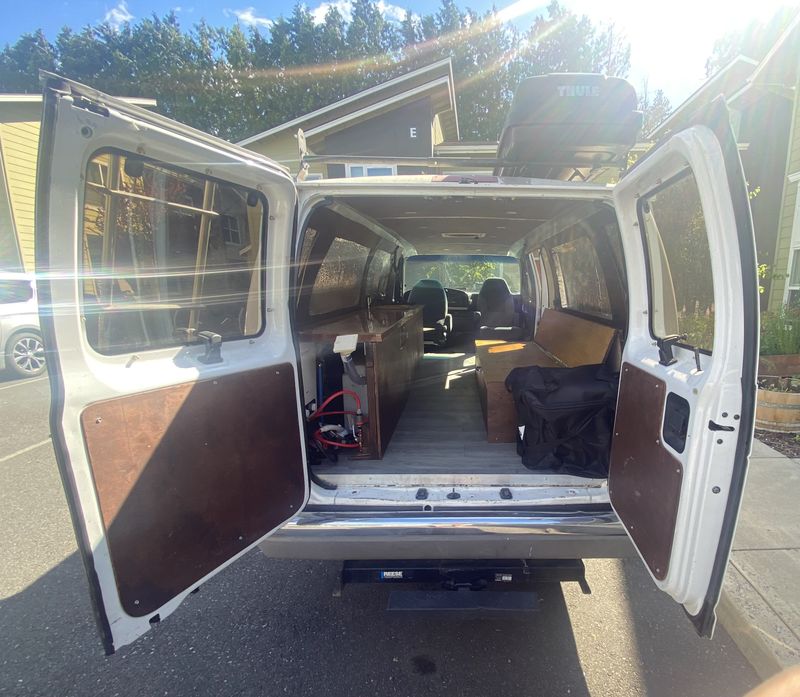 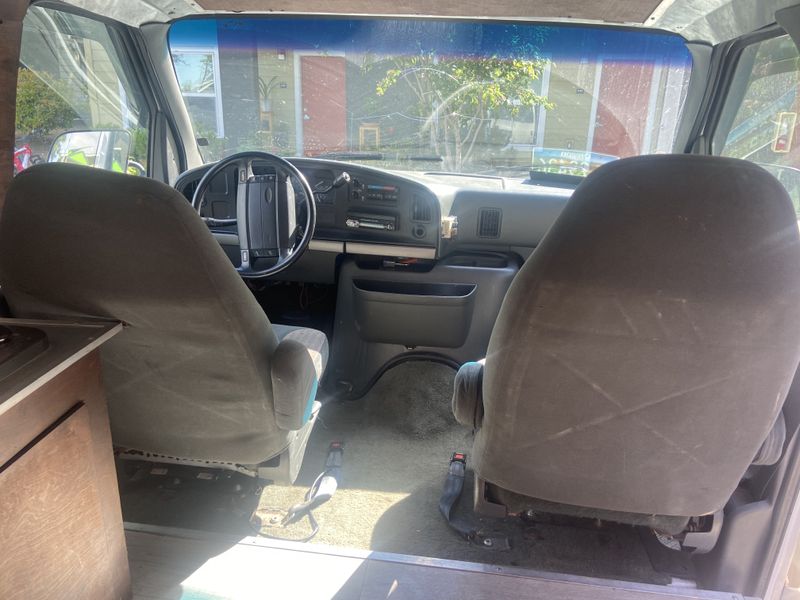 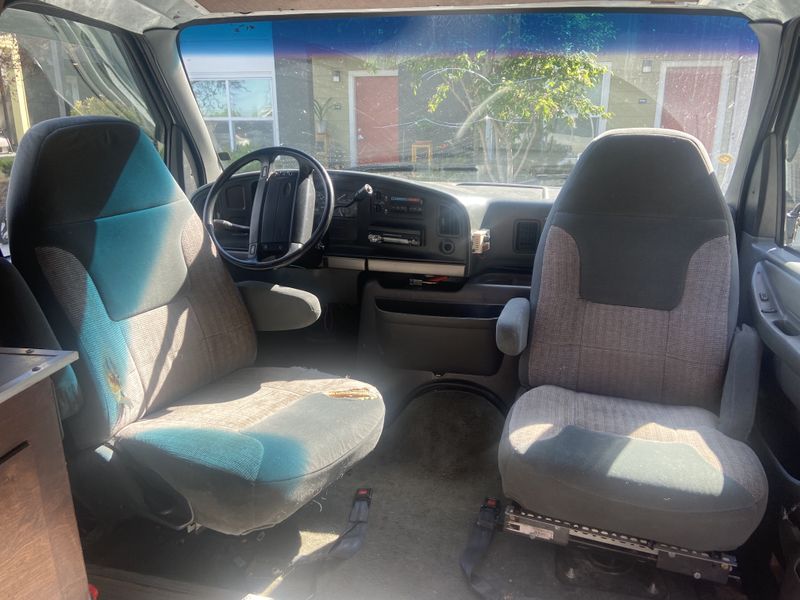 Hi, I'm selling my Ford E-350 conversion van. It's a 1995 ford Econoline 15 passenger van (extra-long cab with wrap around windows), with a 5.8L engine and all the amenities to go off grid. I spent a lot of time and effort building this van over the past 2 years, it currently has (2) 200watt solar panels that charges two deep cell batteries that are stored separate from the engine battery, they are hooked up to a 3000w inverter that I have wired to a multitude of 120volt normal household outlets and 12v usb outlets. It also has a two-burner stove top, a fridge, ceiling fan, toilet, 30 gallon water tank, shower and sink (which are both hooked up to a hot water heater), virtually everything someone would need to live off-grid or go on a long trip without any outside resources. There is a ladder on the back of the van that leads up to a roof rack that has a Thule container. It also has a class 5 hitch which has a 10,000lb tow rating and 1200lb tongue weight, it has a 1-ton chassis (unlike the normal 1/2 ton on most other vans) with that chassis, hitch and engine you could easily tow almost anything from boats to loaded trailers. I also installed a bunch of aftermarket upgrades on the exterior of the van, for example the headlights, taillights, front grill, window visor and a 4 foot LED light bar. The inside of the van has an 8-foot butcher block running down the left side so there's plenty of room for cooking/storage or a tv. Under the butcher block is the hot water heater, water tank and cabinets for storage. The right side of the van has a futon style bench that slides out into a queen size bed, it also has a handle so you can have storage underneath the bench. Between the bed and the back of the van is where you store the Camco toilet which comes with the van (never been used), and under the stove is where the fridge slides out from (on a track). I also installed captain chairs on the driver seat and passenger seats, which enables them to spin around and face towards the back of the van, this allows for more seating for people in the van when you are parked, they can also be reclined which enables another couple places to sleep. The entire van is also heavy insulated on the ceiling, walls and floor (I have pictures of the insulation), almost all of the windows have reflective insulation to help with heat reduction, I have 3 layers for every window along with a heavy exterior cover for the front window of the van. I've camped out in 0-degree weather multiple times for week long periods and have always been plenty warm. This van has everything needed to go on a cross country trip, to the desert, mountain, or city for weeks at a time. Lastly, I put a lot of preventative maintenance to the engine, replacing most parts so I knew I would never have an issue with it starting up and getting me to where I wanted to go, this is because I had full intentions on keeping for my own trips, I've done other bus and van builds in the past but this was a personal build so a lot of effort and time was put into this, however I need to part with it in order to pay medical bills, so let my loss be your win. I can go into a lot more detail about this van so if you have any questions or want to shoot me an offer, send me a message and we'll talk! -Grant L