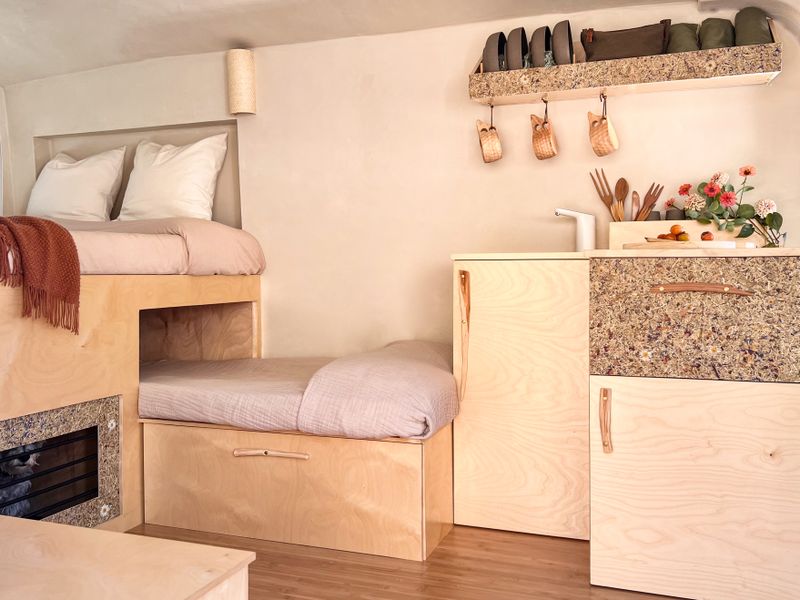 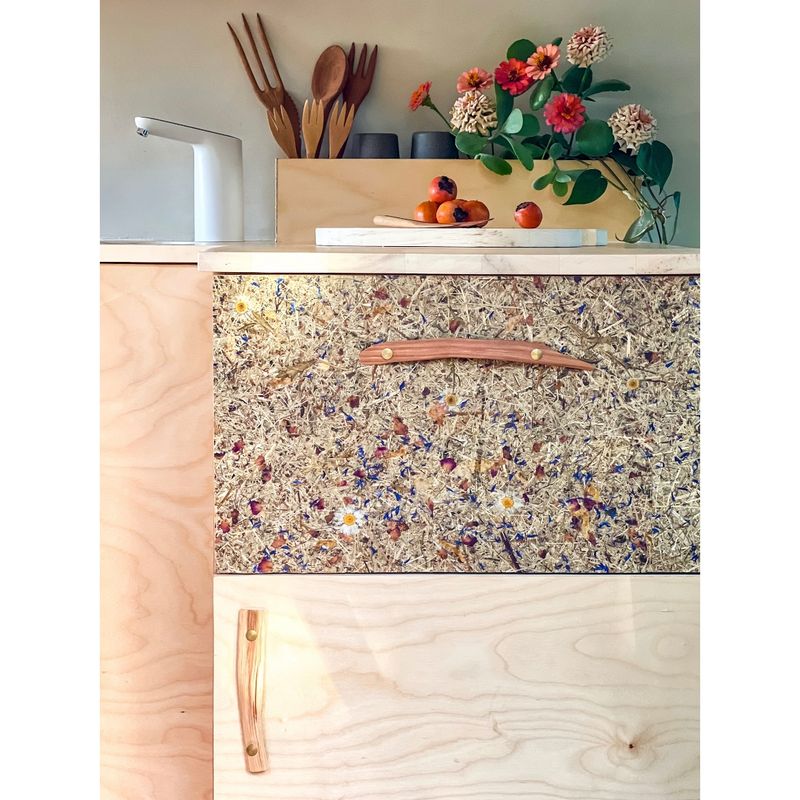 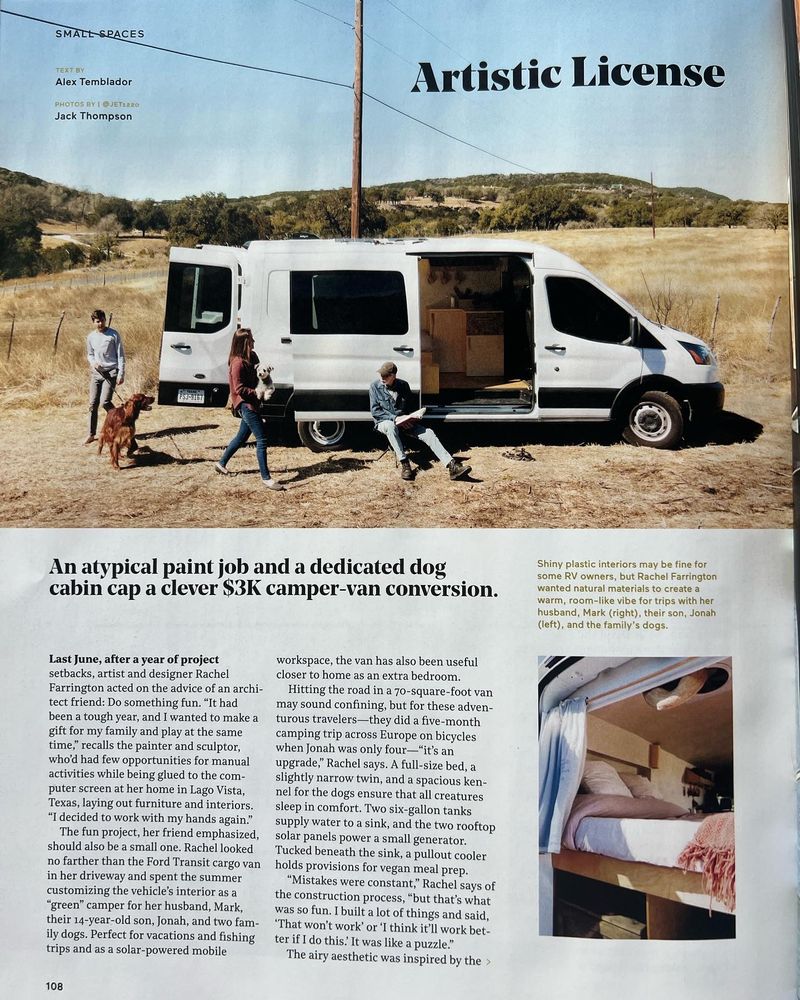 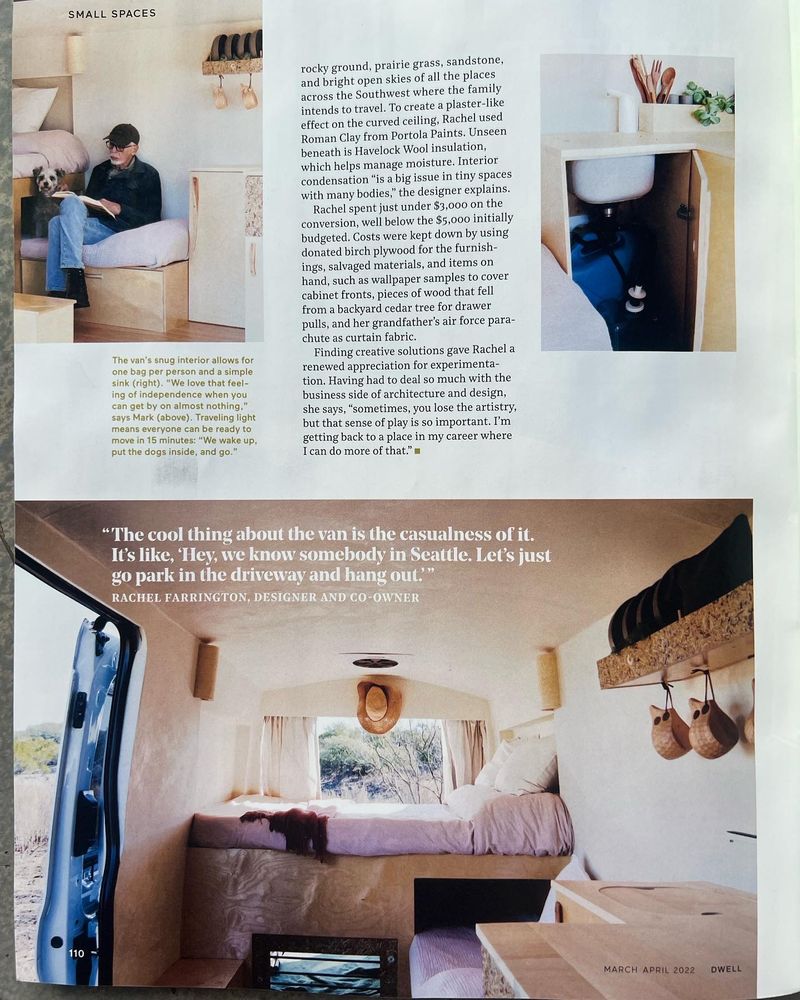 Selling our 2019 Ford Transit 250 Mid-Roof designer conversion van that was recently featured in both Dwell and RV magazines! Some of the designer features include Roman Clay lime-based plaster interior, custom furnishings from factory finished 9-ply Rockler Baltic Birch, Organoids (Austrian luxury surfaces company) Alpine hay and pressed wildflowers on several surfaces, thick Havelock wool insulation, and solid strand bamboo floors. The main cabin area features a full-sized bed with thick memory foam mattress, a slightly narrow twin-sized lounging sofa, a kitchen with sink and wood countertop, a large ‘pantry’ drawer, pull-out cooler, storage area that fits 2-3 duffle bags, a bench/boot box that also houses the Ecoflow River solar generator that plugs into 300w of Renogy roof mounted solar panels, two interior lights, and a shelf for dishes/toiletry bags. The lights and faucet/pump are removable and able to be recharged with the generator within 1 hour (they last approximately 3 weeks on each charge). There is plenty of solar/battery to charge multiple phones, tablets, laptops, cameras simultaneously without running out. The back ‘garage’ area features a spacious dog kennel and another separate area for gear and ‘cooking’ gear or camp stoves. There is additional water storage with a recharging shower head/pump that can be used to spray off dogs or rinse off in the backcountry. This is set up primarily for extended glamping and work-from-the-road adventures rather than true van living (unless you are pretty tough). Over the bed there is a vent and we used a small recharging fan to pull air through, but there is no AC. It’s great for those crisp mountain and desert nights and fine to about 80-85 degrees, but tough for summer nights in the South. You could add a portable AC (Ecoflow makes a great one) and run it off the solar generator if you wanted conditioned air. The insulation keeps it comfortable just on body heat down to around freezing or a little below, but I’d probably want a heater for deep freezes if you plan to chase snow. The conversion was completed in August 2021 and we have spent about 6 weeks total traveling with it, so it feels like a new conversion. The birch ply was donated to me from a manufacturer, and it has some drilled circles hidden on the inside doors of the cabinets — they only affect the aesthetics of the interior of the cabinets, but I wanted to mention them. Otherwise, it’s very clean and the details are sharp. It has been a fun adventure van, but I’m selling to fund some new projects.