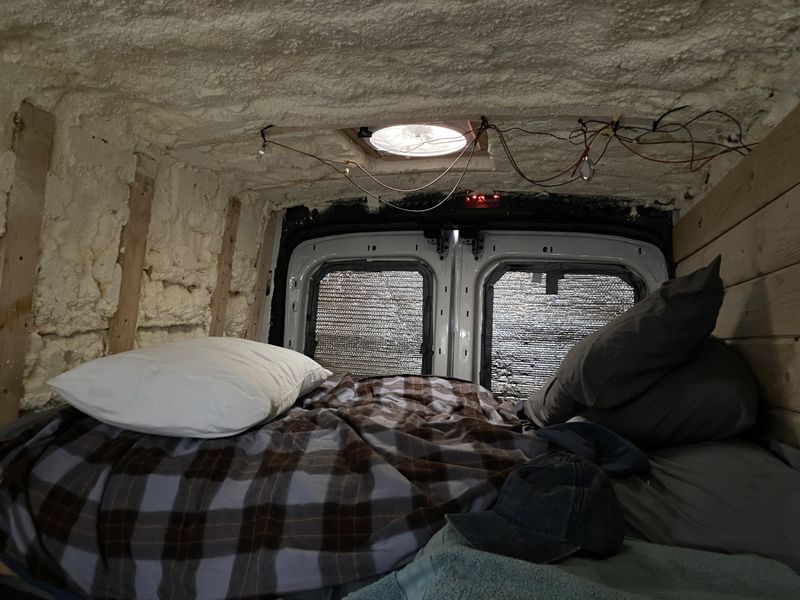 I recently purchased a class b rv so it’s time to sell my 2016 Ford Transit 150 Medium Roof LWB. The medium roof with the long wheelbase has a standing height inside of 6 feet. This makes it a lot more confrorabke then the oother medium roof models that are shorter inside. The van has the 3.7 V6 Engine that currently has 52,508 miles. This engine powers the van nicely and makes for an enjoyable vehicle to drive. Whether it’s your dauly driver or just used for taking vacations with the family your time behind the wheel of this transit will be enjoyable. I’ve added (2) MaxxxAir Fans in Smoke Color ($280 each fan) to the van. The fans are the 10 speed model with the ability to have air coming either in or out of the van.. The fans controls are located on the base of each fan. The 2 fans provide great air flow in the van when turned on and in opposite directions coupled with a slight crack in the front windows. The van also has (3) Spray on Insulatinn Kits ($389 each kit)added to it. This makes the van stay warm in the winter and cool in the summer months. Along with the benefits of temperature the insulation also makes for a much quieter ride in the van. This is particularly nicer and of great benefit when traveling at highway speeds. Along with the fans and insulation the vans windows are tinted nicely and vans air condition blows nice and cold and has the ability to cool the entire van when left on with the engine. It also comes with the ability to cover the front 3 windows with custom window covers made out of reflectex. The van also has 2 rear windows that provide an opportunity to convert to an opening window with an adjustment and add on part purchased for them. The van also has a rear towing package added to it along with connections for a trailers lighting system. This van has not towed anything for any extended length of time in its past. The tires currently on the van were purchased amd manufactured in 2019 as stated on each tire. The van has a custom flooring added to it for asethic looks at the same time providing for a small amount of the benefits of insulation. The inside walls of the van have been finished in t&g pine wood over the insulation making for a nice warm look inside the van. In the rear of the van a platform has been built and a brand new Full Size Mattress ($339 mattress) has been placed on top. This makes for a wonderful nights sleep and is much more comfortable then the camp pads and small foam mattresses that most campers have in them. The mattress and the platform itself are both easily removable as the platform consists of 2x4’s that with little effort come out and allow for the van to be completely opened up throughout the inside. The van also comes equipped with a 12v refrigerator ($340 for fridge). The power is currently not running to any part of the van other then what is provided by the vans electrical system. I had two different power systems for the van. The first one consisted of house batteries that charged with the van as it was running and then powered the fridge, fans, lights etc when it wasn’t. The second system I switched to was the jackery portable il i’m oko battery system. This provided me with power as needed when I traveled and used van as a camper. The van is being sold without an electrical and power system. That part will be left up to the new owner to decide what fits their needs. The picture of the inside is to show you that the insulation is blown on throughout the van all the way to the ceiling fan and not just the walls. It’s an extreamly well insulated van as I used 3 spray on insulation kits in the process totaling over $1000 in insulation on this van. nooo