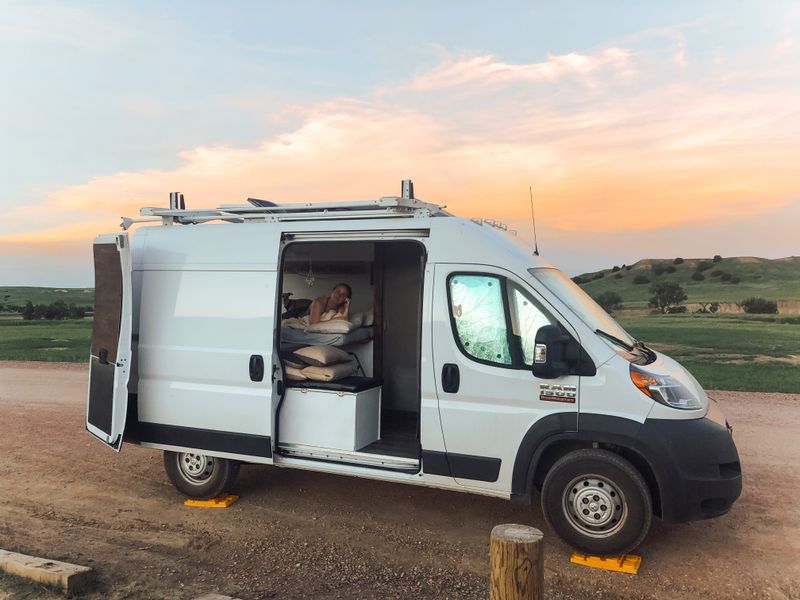 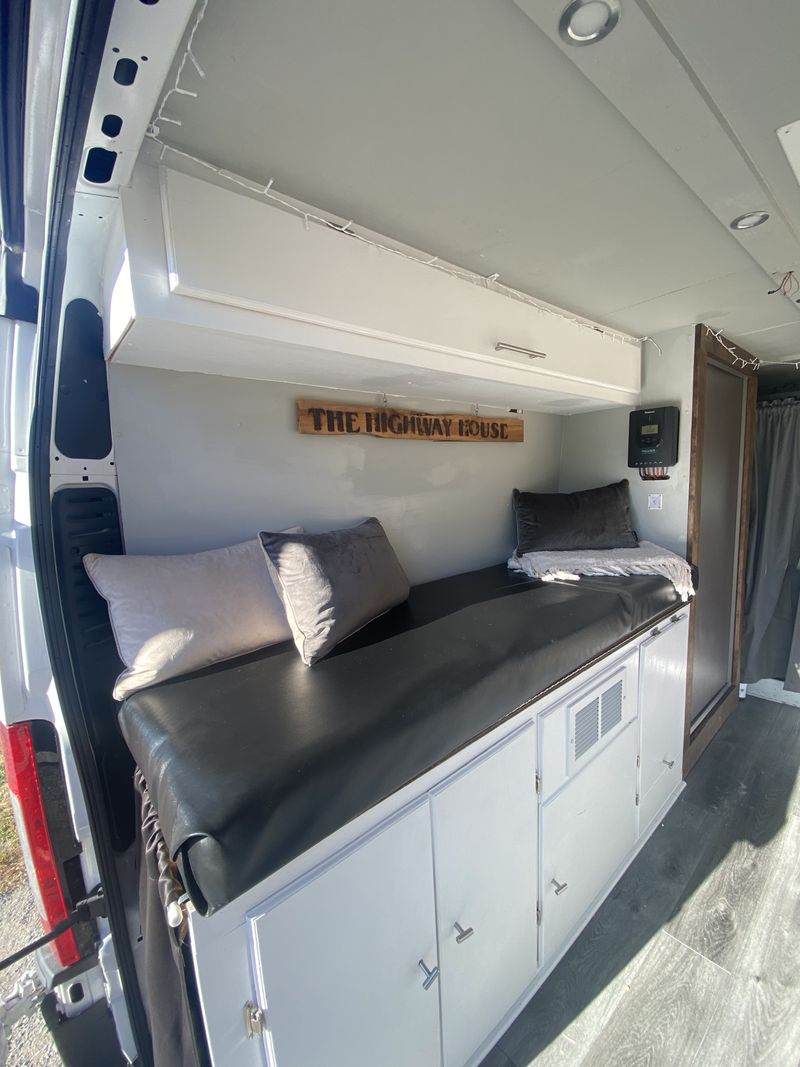 **will deliver** Purchased in 2019, moved in 2020, traveled full-time 2020-2021! It has been a labor of love and a work-in-progress since it was purchased. This van is perfect for a tall traveler. Van was constructed with 6'3" human in mind. We love our home on wheels, but we are transitioning and can't give her the road life she deserves! -400 watt solar -400 Ah AGM batteries -4000 watt pure sine inverter -Dometic AC/DC fridge -Air Head composting toilet -Induction cooktop -Fold out table -Couch converts to a full size bed -Fanatic ceiling fan -Roof rack with ladder arm (perfect for catastrophic independent adjusters) -New tires -Windows included in purchase! Two rear frameless windows and one sliding door glass side window. Install the windows or sell the windows - it's up to you! *Transitional, convertible room. Originally intended to be shower, but can be office, closet/storage, etc. **In the past, the ESC light has occasionally come on and would say something about the “hill assist”. We took it into a dealership for diagnostics. They speculated a couple things, but because the light wasn’t on then, they couldn’t know for sure. The light doesn’t come on frequently and it’s typically only on long road trips. It’s never caused any issues and it hasn’t caused the van to act up at all. From what I understood, the dealership didn’t think it was a fix that needed to happen unless the light came on and stayed. It could just be a short in a fuse or something. We obviously want to be very transparent about it, even though it isn’t currently on (and hasn’t been for a while). We will provide the diagnostic report and are open to adjusting the price accordingly. Here’s more of a narrative about the van: The van has 4, 100 watt solar panels. It has a 2, 200 amp hour batteries with a 4000 watt pure sine inverter with an 8000 watt surge, so it can handle a large load. We are careful with when we cook if we are using the plug in cook top. The solar keeps up wonderfully with all the 12v appliances (toilet, fridge, lights, water pump, etc.), but 120 appliances like the cook top and coffee pot take a bit more juice! We don’t use both at the same time (I make coffee before I make breakfast). We actually had talked about switching to a butane cooktop to save that power gold, but we never really had an issues! The ONLY thing we had issues with was running a space heater because they suck power! I will mention that we chased weather. It does not have a heater or an AC. We spent the winter in the southwest and I’m California, and the summer in the northwest mainly Washington and Oregon. You could easily install a heater behind the drivers seat, but we opted not to! As far as plugins, there are two usb plug ins next to the fridge and two more on the front of the inverter. There are also three regular plugins on the front of the inverter. What we did was plug a short extension strip into the front of the inverter and mount in on the side of the lower storage and plugged into that when we needed it. Luckily, most everything in the van is 12v and you don’t have to worry about any of that. As far as lights, there are four silver recessed lights on the ceiling and there’s a switch in the middle to turn them on and off. It has a composting toilet that is vented to the outside of the van. We’ve never had any issues with it! The electric cooktop is included in the purchase of the van. The van also has insulation in the walls and ceiling. It has thin insulation on the floor, then plywood, underlayment, and flooring! The windows are also included. You can have them installed or sell them (we paid $750 for them). The passenger seat is not on a swivel, but it would be pretty easy to install. Let me know if you have any additional questions!